The Alternator Belt Broke: What To Do In Such A Situation!

Any car enthusiast may be in a situation where the alternator belt has broken on the way. Of course, many are interested in the causes of the break, but they are not the main thing in this case. It is much better to figure out what to do and how to move on.

In this material, we will analyze in detail why the alternator belt breaks, what to do immediately after detecting the problem, how to get to the nearest workshop and whether it is possible, in principle, to drive a car if the drive belt is broken.

Alternator belt functions in the car The alternator belt is torn? Before you figure out how serious this is, you need to understand its purpose. Let’s imagine a modern car and its contents. On-board computer, air conditioning and navigation systems, anti-theft device and much more. These gadgets work thanks to electric current.

If the car engine is muffled, they are powered by the battery. As soon as you start the engine, the alternator starts to work. It not only ensures the operation of gadgets and devices, but also charges the battery, promotes the transmission of torque from the ICE crankshaft to the shaft of the alternator. The belt may break or break very unexpectedly while driving. In this case, it will not be able to perform his functions. What will happen if the alternator belt breaks, we will understand below.

How to determine that the alternator belt has broken?

To understand whether the alternator belt has broken or not, pay attention to the following symptoms:

What happens when a belt breaks?

What consequences can arise if the alternator belt breaks:

In addition, the clutch of the air conditioning system in the car and the pump of the hydraulic power steering will stop functioning.

For what reason the alternator belt breaks 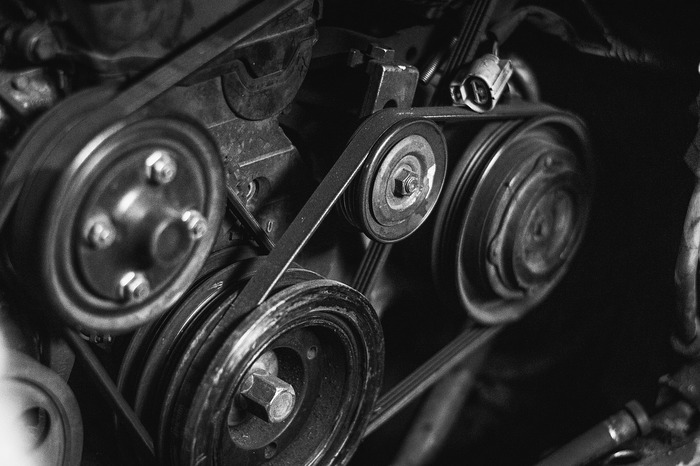 The arisen problem is solved simply. It is enough to install a new belt. After that, you can use the car in normal mode. But how to prevent this unpleasant situation again? Before installing a new one, you need to understand why the old alternator belt broke. Consider the possible reasons:

The alternator belt has a specific life. We recommend changing it in accordance with the manufacturer’s recommendations, without waiting for the moment when it breaks. This can also happen due to reasons beyond your control, for example, a poor-quality product will last much less, but most often the fault is the incorrect adjustment of the transmission system.

The device consists of two pulleys on shafts interconnected by a belt, as well as a tension unit. If the pulley deviates from the plane of operation, the alternator belt may break due to overheating or destruction of its elements.

Pay attention to the unit tension. If it is too weak, the belt slips without interlocking with the surface of the pulley. In this case, the belt loses its elasticity, overheats and then collapses. With excessive tension of the product, its tension is observed, as a result of which the reinforcing fibers break. To answer the question why the alternator belt has torn, you need to take into account possible additional reasons:

Why did the alternator belt break? How to establish the true cause? Experts recommend paying attention to the belt itself. Determine which side it has worn out and analyze what could have caused it.

Can I drive if the alternator belt breaks 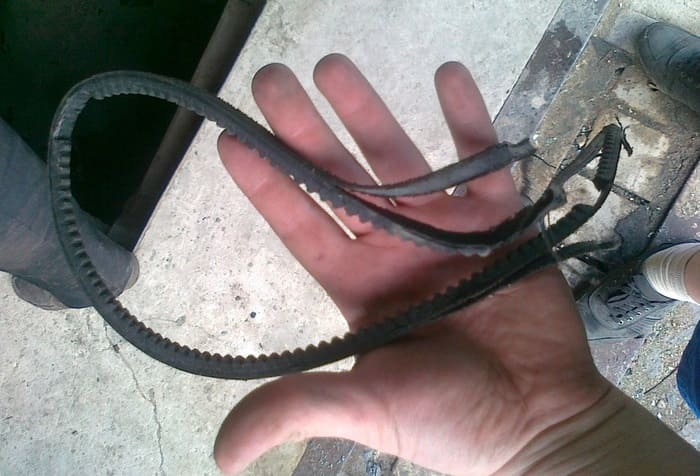 Car owners often wonder if it is possible to drive if the alternator belt has broken. Yes, you can continue the journey, but you will be able to overcome a short distance, depending on the battery charge. Therefore, if such a nuisance happens to you, we recommend that you get to the nearest car service.

Do not forget to turn off devices that consume electrical energy, such as air conditioning, audio system, GPS-navigator, external and internal lighting devices.

Of course, if the problem happened at night, the headlights must be left, because without them it is unsafe to continue driving. Having approached the repair site, do not turn off the engine, as its restarting will contribute to a faster discharge of the battery due to the additional load. But still, if the alternator belt has broken, we do not recommend further movement.

It should be borne in mind that in modern models, the auto drive of the alterntor and pump is carried out at the expense of one belt. Movement with the lack of circulation of the internal combustion engine coolant can lead to overheating and serious repair. The battery is also better not to discharge until the end. Therefore, once in a similar situation, use the services of a tow truck that will take your car to the nearest car service. The most important rule in the case when the alternator belt is torn is not to panic. If this happened in the city near the auto parts store or service station, you can drive to them yourself. Otherwise, we recommend using materials that are at hand to replace the belt. It is allowed to use:

The selected material must be very durable. Consider the process of replacing a alternator belt with a rope. Fold it in half twice. The tensioner must be lowered to the limit and install the lace. After that, the roller will stretch and return to its previous position. The rope should bend about 1 cm in the middle, do not loosen it.

A little higher, we talked about the possible consequences of the situation when the alternator belt broke, and answered the question whether it is possible to go on the battery. As you remember, further driving in the event of a breakdown threatens serious repair. So, you need to pre-check the signs of belt wear and take action. How to do it? This information is important for owners of any car – domestic and European.

The alternator belt may break in the near future if:

The alternator belt is torn? How to prevent this from happening again? Do not forget about preventive measures to identify the degree of wear.

Follow the belt life recommended by the manufacturer. Change the product in a timely manner, approximately every 30 thousand kilometers.

Check belt tension regularly. It should not be too weak or strong.

Check the condition of the belt every 5 thousand km. If signs of wear appear, change it immediately. If cracks appear on it, it’s time to buy a new one.

Do not allow motor fluids to get on the belt.